If you like this artice, then also check the maximum write speed of your Canon, How to get rid of hot pixels on a Canon camera or troubleshooting your Canon.

The Fujifilm X-T1 and X-T2 both technically have shutter actuation recording, but some disruption from firmware updates has rendered the EXIF shutter count figure unreliable. You can get a (possibly incorrect) ballpark figure from the default file/folder numbering system though. They couldn't find it after the first two times I sent it back. (1) viewfinder assembly was out of position causing the auto focus to operate improperly. (2) adjustments were carried out on the viewfinder assemble and AF sensor. (3) Adjust exposure, focus and shutter speed. (4) Shutter unit was replaced because of shutter count 100. Nikon d3300 Shutter Life Database. Average number of actuations after which shutter is still alive: 47,582.4 Average number of actuations after which shutter died: 48,037.0. The rated shutter life of a D3100 is 100,000 shutter actuations. But that’s not terribly useful, because that’s really just a statistic. When Nikon says 100,000 actuations, they’re basing that on a defect-free shutter and their decades of camera design experience. So 200,000 and 500,000 is the Shutter Count Lifespan for Sony Alpha Cameras? Yes, if you have been paying any attention at all, then you will have seen that the official shutter count lifespan from Sony is 200,000 and 500,000 shutter release cycles. Again, that is the OFFICIAL number from Sony.

Anyway, here are some links to different software with the ability to show you the shutter count. If you find it hard to find your camera model, use the search tool in your browser and type your Canon model. If you own a Rebel camera, use Wikipedia to get the European/international model name.

You find the software here and down below you have a tutorial how to find the shutter count.

400plus (free and open source)

For 400D 400plus is available and works like Magic Lantern. Tutorial here.

For 350D CHDK is available and works like Magic Lantern. Tutorial here. Also check this tutorial. 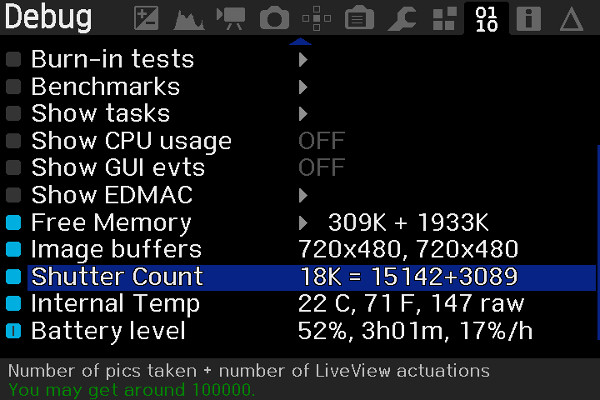 For some newer models it reports counters in 1000 increments.

If you use Linux you can try out Gphoto2. Install process:

Contect camera and computer and write in Terminal:

Now you should see what kind of camera you have connected. If so, continue with:

If you get an error, try:

”Yes, for now many antiviruses have false positive detection of my program, because i use my custom protection system.
Unfortunately, it’s very difficult for a single developer to influence huge corporations. So use virtual machine is not a problem”

For Powershot and Ixus (and Canon EOS M3). You find the tutorial here and the camera support here.

The democlaims to read shutter counts from cameras with Digic III and newer. The shutter count will be displayed in the Log panel.