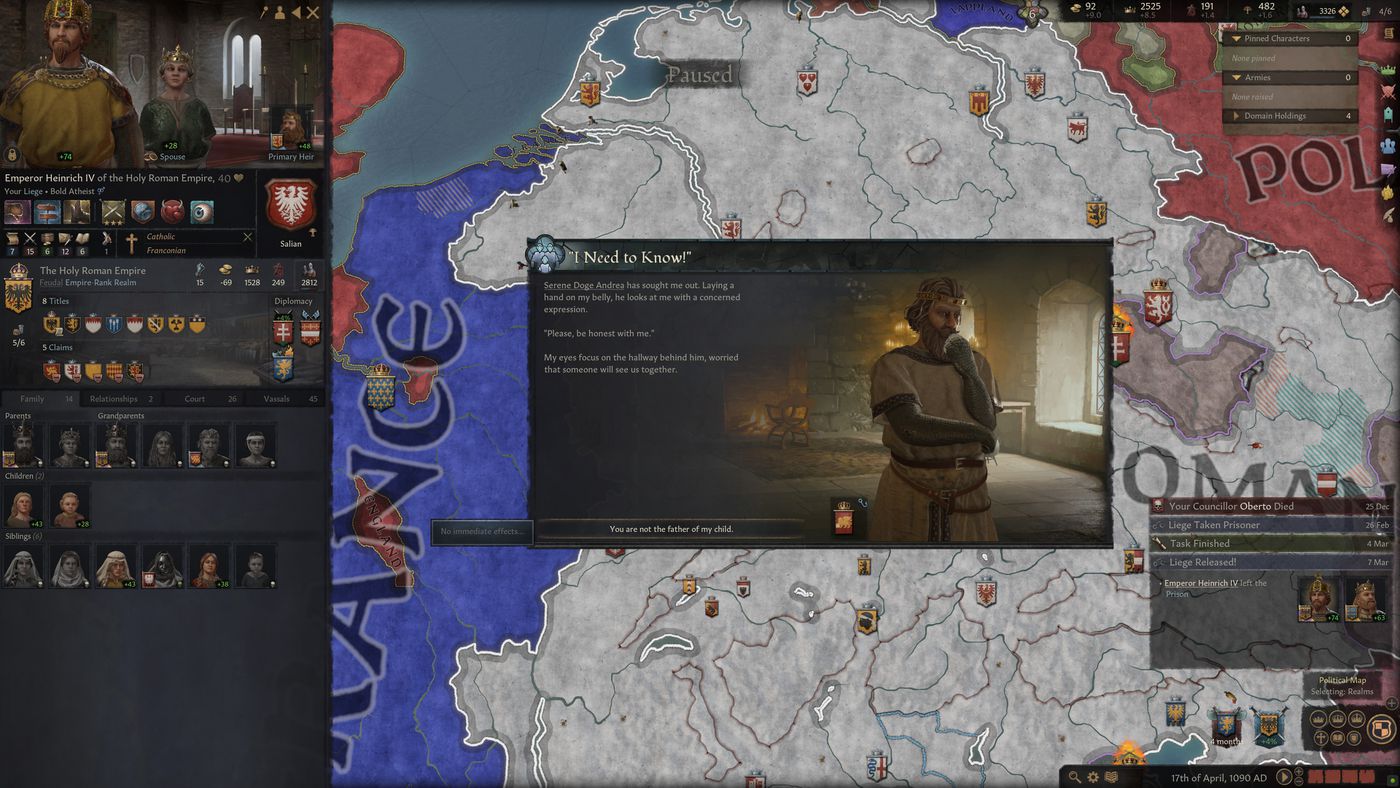 Jan 18, 2021 “Terrible kings, vengeful cousins, and medieval kingdoms — Crusader Kings 3 is a wonderfully dense game that rewards patient players Setting taxes, choosing advisers, and controlling armies can be satisfying, but the real lure of Crusader Kings 3 is the elaborate interpersonal drama the game creates.” – Polygon. How long is Crusader Kings? HowLongToBeat has the answer. Create a backlog, submit your game times and compete with your friends!

Paradox’s Imperator: Rome feels like an obligation, a necessary addition of an ancient world strategy game to add to its stable of medieval, renaissance, Victorian, and World War-era historical works. This doesn’t mean it’s a bad game — although it is a somewhat unfinished one. But it is a game that lacks the spark of the studio’s top titles — and this lack of soul has led to a bit of fan rebellion, which led game director Johan Andersson to respond to criticisms this past weekend.

But in a sense, Paradox games have been building to this point, where the question of whether we can even begin to describe them as “good” or not at launch feels slightly irrelevant. How did we get to this point?

A history of history sims

First, let’s back up a moment and discuss why Imperator seems inevitable, and how Paradox built its complex reputation. Paradox got its start in the computer gaming world in 2000, with the release of Europa Universalis, a worldwide grand strategy game spanning the late medieval era to the French Revolution. It followed this up with the medieval-era Crusader Kings, the 19th-century Victoria, and the World War II-era Hearts of Iron. All of these game looked and played roughly alike, a macro-scale real-time-with-pause game involving moving armies from province to province — and indeed, using various imports, patches, and hacks, players could even simulate human history for over a thousand years using all four games. 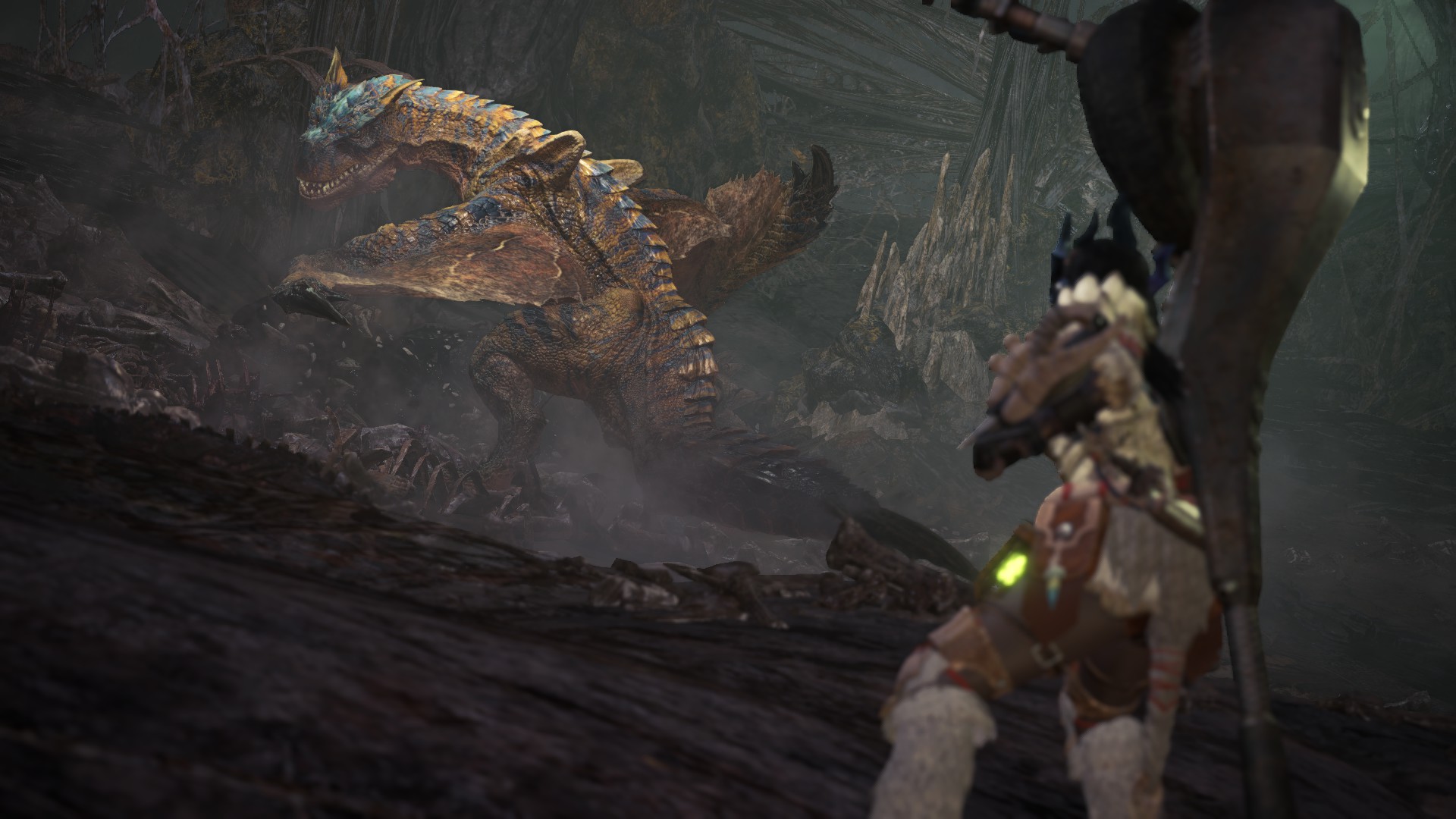 The success of these games allowed Paradox to become a publisher, with hits like Magicka, Cities: Skylines, and Battletech. Its core internal team, Paradox Development Studio (called PDS from here on) continued to develop games in that vein, with the 2010s proving especially fruitful, with Crusader Kings II, Europa Universalis IV, and Hearts of Iron 4 all riding Paradox’s DLC and expansion to relevance for years and years after release. It also added Stellaris, a more conventional Master of Orion-like space strategy game (while Victoria II sadly fell by the wayside).

That expansion/DLC/patch strategy is central to how PDS is understood by its players. Its games have developed something of a reputation as not being finished at launch. It’s certainly true that Paradox sells expansions and offer free patches for years afterward that can dramatically improve these games. (Crusader Kings II, six years in, got its 15th and possibly best expansion last year in Holy Fury.) But the best of PDS games show that core excellence from the beginning — that’s what Imperator is missing.

Paradox makes good strategy games. That is, it knows how to create what Sid Meier called a series of interesting decisions. In Imperator, you take over an ancient state in the era in which Rome is about to become an Italian superpower. You appoint generals, declare war, build alliances, develop your economy, adjust laws, keep powerful families happy, and so on. If all you need to know about Imperator is that it’s a PDS game through-and-through, and it’s competent at depicting its era, then it is a success.

But there’s something slightly missing from Imperator. PDS’ three other historical strategy games have core tension from launch that showed the soul they had from the day they were released. By “core tension” I mean an internal gameplay loop that pushes and pulls the player in interesting directions, even when they’re succeeding, and also fits as a simple summary of the game as a whole. 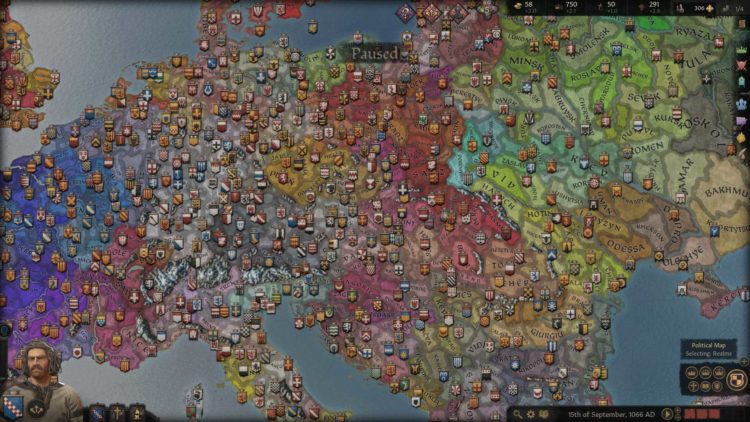 Above: A complex situation in Iberia in Imperator: Rome

For example, Crusader Kings II’s core tension is that it’s got Game of Thrones-like dynastic politics, and the bigger you get, the more likely you have pissed-off rivals and vassals. Yes, there’s an economic and military aspect to the game, but if you figure out and enjoy the relationship aspect, you’ll get CK2. With Europa Universalis IV, it’s the web of alliances to keep your nation safe; with Hearts of Iron IV, it’s about economics and production of arms and units.

With Imperator? Well, it’s not totally missing that level of internal tension, like Stellaris disastrously was. But it’s lacking anything that stands out. The goal is to take over the world and the more you do that, the stronger you get. It’s fun, as far as it goes, but the part of other PDS games that needled its way into my brain so that I could not stop playing seems lacking.

A theme in Andersson’s forum post is that fans seem to demand more content — more differences between factions, more events, etc. While I understand the impulse to say Imperator has a lack of “content,” his points that the game has plenty of content relevant to other launch games seems valid. What’s missing is that tension — Hearts of Iron IV lacked differences between nations in major ways, but almost every nation still had that production loop that kept just about any game interesting. In CK2, no matter where you play, you’re going to have a jerk brother who’ll take your throne at the drop of a hat. Imperator doesn’t have that. The issue isn’t lack of content, it’s lack of dynamism, lack of core tension.

But again, the idea that something is missing doesn’t seem like an overall game design issue for a lot of PDS games because they’ve added so much content via their expansion and patch strategy. That way the idea is that what’s missing is stuff, not soul. Part of the reason for this is that Imperator feels so close at times to actually landing what it needs.

The closest Imperator comes to getting that tension right is when it works like Crusader Kings 2, where your characters’ loyalty and willingness to trigger a civil war. All kinds of things make them disloyal, from random events, to disputed succession, or legions personally loyal to them. When enough are unhappy, civil war can break out.

The problem is, unlike Crusader Kings 2, this level of interpersonal drama varies wildly across the game. Playing as Tartessia, a small Celt-Iberian city-state in southwestern Spain, I was constantly managing my tribal leaders and fought regular civil wars. Playing as Rome, an experience which I’d guess would be somewhat more common, I took over most of the central Mediterranean, had double the “points” of anyone else according the scoring system, and never found an internal problem I couldn’t solve by clicking the “bribe” button ever other hour or so. It’s almost there … but not quite. And this is the sort of thing a later patch could easily tweak so that difficultly maintaining loyalty escalated along with martial success far more effectively.

There are other balance and interface issues that combine to get in the way of what the game seems to be trying to do. For example, in my game as Rome, I made a lot of money. Money, in PDS games, is primarily spent on buildings, and I’d have enough that I could buy a dozen buildings across my various provinces. In Europa Universalis IV, when trying to build, you can see the effects of each building on each province directly on the map, so you know where to, for example, put a marketplace in a place that will give you the most money, and put a barracks in a place that will give you the most manpower.

That simply doesn’t exist in Imperator — you have to click on each province individually. It’s not a huge problem when you’re small enough to know exactly what your needs are, but at scale, it’s a level of micromanagement that distracts from the game.

Micromanagement is a consistent little drag on Imperator, even at its best. Diplomacy is set up so that your most options involve states your own size, thus when you get to become a superpower, diplomacy fades away in favor of war management. That’s fine, and even makes sense with the setting. What doesn’t make as much sense is that even still, you get individual notifications constantly from other countries wanting to trade with you. Those 0.7 gold pieces per month add up and are good, so you want to say yes, but they … just … keep … coming.

Get those kinds of issues cleared up, patched, expanded, let the game show itself without annoyance, and both developers and players should be able to hone in on what Imperator: Rome could and should be. And because it’s Paradox, because it has a history of quality of life and balance improvements, we can expect that!

Look, Imperator is good. I’ve got some issues with it because I feel like it’s behind most other PDS games at launch — if this were a review, and it started as one, I’d probably give it a 75/100. Imperator has the potential to be great, and it has the potential to get there in a hurry with a few balance and interface updates, and we can all expect Paradox to try to make that work.

But I’ll probably be replaying Europa Universalis 4 until then.

GamesBeat's creed when covering the game industry is 'where passion meets business.' What does this mean? We want to tell you how the news matters to you -- not just as a decision-maker at a game studio, but also as a fan of games. Whether you read our articles, listen to our podcasts, or watch our videos, GamesBeat will help you learn about the industry and enjoy engaging with it.How will you do that? Membership includes access to: