There seems to be a lot of controversy surrounding a 1939 French edition of Vogue magazine that featured Frida Kahlo on the cover. I have been researching the life and works of Frida Kahlo since 2003 and during my research I have read numerous accounts in books, magazines and internet articles about this elusive magazine cover. Some say it was just an image of her hands adorned with several rings while other say it was a full image of her based on a photograph taken by Nickolas Muray. I have spent hours searching for the magazine cover and have not found it anywhere. Of all the accounts I've read no one has been able to produce an image of the magazine cover…and many also admit they too have searched endlessly for it and never found it.

In August of 2011, my website colleague, Isa, emailed me this cover image. She found it somewhere on the internet. I did some research and found that two people had posted the cover image. I emailed both of them to ask what they knew about this magazine cover and where they found it….unfortunately neither replied. So….I emailed Vogue Paris with the same inquiry….they didn't respond either. On Octobor 20th, 2011, a site visitor emailed me to confirm that the image on the left is in fact a real cover from a recent publication of a French Vogue magazine. I have once again emailed Vogue Paris to try to find out what month and year the cover was used. This time I composed the email in French hoping that might encourage them to reply..but so far no response from them... 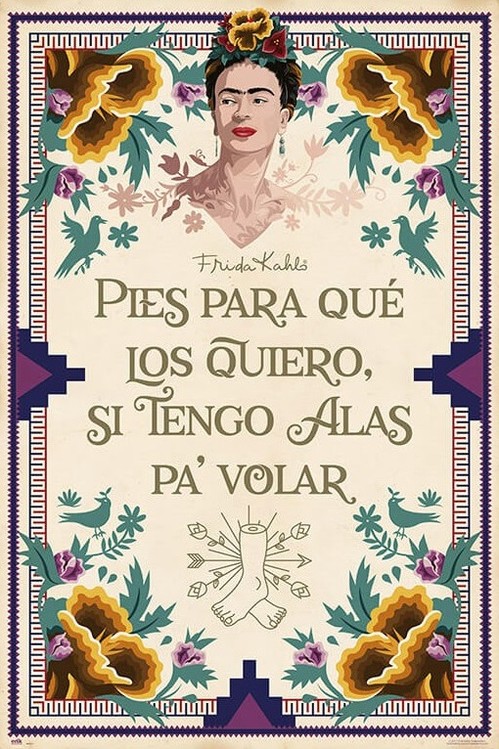 The Cover Translated to English:

A WOMAN OF POWER: FRIDA KAHLO

A complex and tormented personality, Mexican painter Frida Kahlo injected her art with her physical and romantic tribulations, turning them into symbols of her restless will to assert herself and be independent

'I am not sick, I am broken, shattered. I am happy only when I paint.' With these words Frida Kahlo, the Mexican painter who made her art a means of self-analysis, was capable of describing herself better than anyone else. So involved with revolutionary ideas that she would declare she was born in 1910, the year of the Mexican Revolution, she was actually born three years before, in 1907 in Coyoacán in the Casa Azul. Pain is a constant presence in Frida’s life.
At only six, she has to come to terms with poliomyelitis, that leaves her with a deformed leg and the nickname 'Peg-legFrida'. But with the dignity and her will to live that have always marked her personality she carried on with her life. Endowed with a brilliant mind, in 1922 she is among the few girls admitted to prep school to be a doctor. Here, she meets her first love, Alejandro Gómez Arias. She is with him when in 1925 the bus they were riding on collides with a trolley car.

Jan 31, 2020 To run Chrome in a safe mode, you should open it in incognito mode.This automatically disables all add-ons and extensions. To do this, click File in the menu on the top and choose New Incognito Window. Apr 21, 2020 Is Teamviewer safe? Teamviewer uses AES 256-bit encryption, which is a recognized high-quality standard, and also used by NordVPN. It also allows you to enable two-factor authentication, force password reset in case of suspicious activity, and whitelist trusted devices. You can also strengthen Teamviewer’s security by tweaking its settings. NordVPN’s CyberSec feature blocks malicious websites and protects your device from accidentally joining a botnet zombie army. Guard your sensitive data With NordVPN, your online traffic travels through a secure encrypted tunnel. This way, it’s out of reach for cyber bad guys who are eager to snatch your private data. Jul 01, 2020 NordVPN is one of the most popular VPNs out there, but many wonder about its security. In this article, we go over the question if NordVPN is safe to use, looking at both the service's history. Is nordvpn safe for banking. Working with NordVPN includes taking into account the expectations of diverse global stakeholders. Among others, we have a responsibility to contribute to global communities in a changing world – both online and offline. NordVPN’s key priorities of social responsibility are: Running business in a socially responsible and ethical manner.

The impact is terrible and Frida is lucky to be alive. She will spend a whole month in the hospital and three in bed suffering extreme backbone pain. Immobilized in bed, she starts painting. Her bed was covered with a special canopy, featuring a mirror mounted at the bottom so that she could look at herself and be the subject of her paintings. This is how she realized her numerous self-portraits. 'I paint myself because I spend a lot of time alone and am I the subject I know best.'
Solitude and diversity are her true training ground. Frida speaks of her daily life, of her obsessions, of her body and of female sexuality through her personal vision of the world and uses elements from the reality around her, taken out of their context. Her work cannot be defined surrealist, one may say that Kahlo embodies that magical South American realism that perfectly blends reality and imagination. Determined to make painting her reason to live, in 1928 she asks Diego Rivera, the Mexican mural painting, for advice. Actually, Kahlo had already developed a strong curiosity for the ‘ogre’ and seducer that would have become her partner.
In 1928, Frida meets the group of young people following Communist Julio Antonio Mella, the partner of Italian photographer and activist Tina Modotti and it is precisely at Modotti’s home that Frida and Diego meet and fall in love. They get married a year later. He is twice her age and has been married several times before. Diego won’t give up, although their union is defined by the bride’s family as “the marriage between a dove and an elephant”.
For her wedding, Frida wears a traditional native gown, the type of garments she will wear from that moment on, the symbol of her revolutionary faith in the glorification of Mexico’s Amerindian past which she shares with her husband. In 1930, she follows Diego in the US for artistic and political reasons, first in San Francisco, then in New York, later in Detroit. Here she becomes pregnant for the second time and for the second time suffers a miscarriage, which she portrays in the painting The Flying Bed (1932). After a brief stay in New York, she starts feeling homesick.
The contrasts with her husband begin at that time. Back in Mexico, Frida suffers another miscarriage. She is in terrible pain, not just because she is unable to bear a child, but also for Diego’s numerous infidelities. When he cheats on her with her sister, Cristina Kahlo, Frida escapes to New York, where she paints her most violent pictures to overcome the pain of the separation.
In this period she starts having affairs with other men and also with women, like American painter Georgia O’Keeffe. She goes back to Mexico only when the extramarital affair of Diego and her sister has ended; in 1936 the couple become closer again thanks to their shared political commitment and collaborate together to offer a shelter to Leon Trotsky at the Casa Azul.
Frida will have a brief affair with the Russian activist which will undermine her unsteady marriage. In 1938 she sets up her first solo show at the Julien Levy gallery in New York, thanks to André Breton who is enthralled by her. The exhibition is a great success: she is commissioned various painting and André Breton offers to organize another retrospective in Paris. Frida in 1939 travels to the French capital but cannot find Breton, and only with the help of Marcel Duchamp the painter will be able to set up a show at the Renou et Colle gallery. In that same year, the Louvre purchases her self-portrait The Frame. Later on her exotic looks and her signature Tehuana costumes, will inspire Elsa Schiaparelli the Madame Rivera dress.
Two days after the end of the exhibition, disappointed by the surrealists, Frida leaves France and goes back to Mexico, but abandons the shared house and moves to the Casa Azul. In Fall 1939 the two divorce and Frida, desperate and determined to get her independence back, gives up her feminine looks, cuts her hair and starts wearing men’s clothes, determined to make a living with her paintings. The work The Two Fridas dates back to this period. In 1940 she travels to San Francisco to be cured by trusted friend and doctor Leo Eloesser, who will persuade Diego that their separation undermines Frida’s health.
The two will re-marry on 8th December of that same year, but Frida imposes a condition: her financial and sexual emancipation. Back in Mexico, she settles in the Casa Azul in Coyoacán, where she will live until the end. Her health conditions get worse, and doctors suggest her to undergo backbone surgery in New York. In this period she paints self-portrait Tree of Hope (1946), where she depicts her wounded and weakened body alongside the figure of another Frida looking straight into the future. In 1950, she repeatedly undergoes surgery which enables her to walk again for short periods. In 1953 her friend, photographer Lola Alvarez Bravo organizes Frida’s first solo show in Mexico. The night of the opening, her health state is so critical that doctors forbid her to get up from bed, yet Diego will have her bed moved to the gallery. She gets there in an ambulance, her mind confused by all the medicines and she will take part in the celebrations drinking and singing with the public.
But the pain in her leg becomes so unbearable the doctors are forced to amputate it. Frida falls into a deep depression, her fortitude wavers. She falls ill with pneumonia in 1954 and dies on 13 July of that same year from pulmonary embolism, although some suspected she died from a Demoral overdose. Frida’s character has been portrayed on the big screen by Salma Hayek in the eponymous film by Julie Taymor.